Mapped: How Britain has the most university educated migrants in the EU 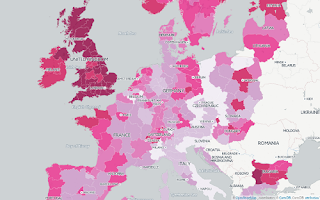 Immigrants in Britain are better educated than the natives, official statistics reveal, with more than half of all foreign-born residents in the UK educated to degree level.

This is the highest proportion in Europe, with Ireland having the next highest share - at 44 per cent.

Of the total UK population, less than one in three people went through higher education, which ranks us seventh in Europe. 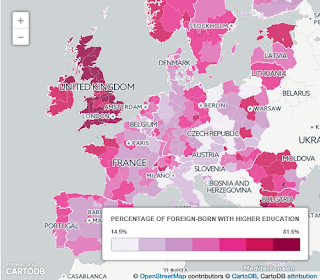 Of the 35 regions with the highest share of university-educated foreign residents, only two are from outside of the UK - the Bulgarian region hosting the capital, Sofia, and the Romanian capital of Bucharest.

Britain has all of the top fifteen, according to figures released by Eurostat for 2011, the last year for which data is available. 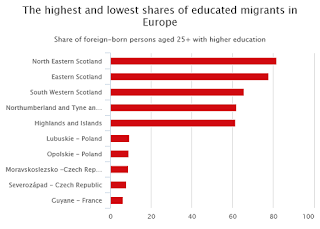 Four of the top five regions are in Scotland, with North Eastern Scotland, hosting the oil city of Aberdeen, topping the list. More than four in five foreign-born residents there have received higher education.

Among the other major players in the EU, Britain is the only one where the migrants are better educated than the locals. 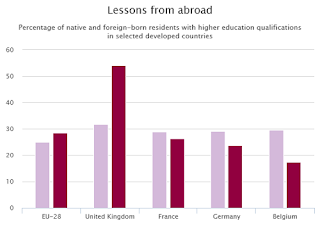 The figures are interesting as immigration dominates the debate about Britain's EU membership.

Many people who are unhappy about current levels of immigration are concerned about what they see as the arrival of low-skilled migrants.

Leave campaigners argue that net migration to the UK - currently standing at 330,000 per year - needs to be reduced.

They have stated preferences for an "Australian-style points system" to reduce low-skilled European migration that they say is draining public services and forcing down wages for the lowest paid jobs. 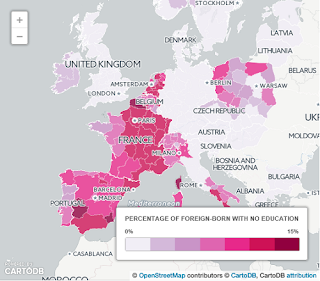 Eurostat, the statistical office of the European Union, suggests that the reality is that many migrants are highly-qualified but struggle to find jobs that match their skills.

Saira Grant is Chief Executive of the Joint Council for the Welfare of Immigrants (JCWI), which ran the 'I am an immigrant' campaign to celebrate immigrants' contribution to society. She responded to the findings:

"This confirms that EU migrants are in the main highly skilled and an asset to our economy. They have helped our economic recovery and we should recognise that their skills are vital to our health service and many other industries.

"In or out of the EU, we will still need foreign workers to fill skill gaps."

At the other end of the spectrum, 95 local areas in Europe - a third of the 280 areas mapped - have no foreign-born people who have received no education, according to Eurostat. 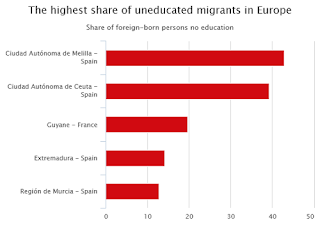 All of these regions are in Austria, Denmark, Finland, Germany, Luxembourg, Sweden and the UK.

France and Spain have the highest proportion of uneducated migrants, though their statistics are skewed somewhat by dominions in South America and Morocco, not shown on the map, which have higher levels than all of mainland Europe.