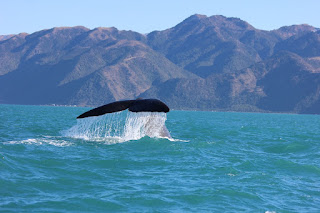 It is not every day that people get to see an actual whale in the flesh. That is why immigrants and locals in New Zealand are considered to be some of the luckiest people on earth. They can easily make a trip to one of the many spots in the country where whales are aplenty. And that is one of the many activities that people living in New Zealand can do – whale watching. It is an exciting activity and one that people would remember for ages.

There are many spots in the country where whales can be spotted. Of course, this is not surprising given just how pristine the locals have kept the environment. That is why whales have chosen to thrive in New Zealand waters. The locals also know how to take care of these animals, which is why they are protected. And with New Zealand being surrounded by these pristine waters with food sources, whales surely love staying in the area.

One of the spots that people can go to for some whale watching is Auckland. Whales usually play in the waters of the Hauraki Gulf Marine Park. The Hauraki Gulf is a part of the Pacific Ocean and is around 4000 sq. km. and is near Auckland and Coromandel. When one visits this park in New Zealand, one can learn and maybe even see many ocean life. It is home to many rare and even exotic living things.

One of the species that one can find in the Hauraki Gulf is the Bryde’s whale which is considered to be critically endangered. It is also amazing to note that more than 25 marine mammals found in the southern hemisphere can be found in this place. This simply shows just how bountiful the waters are in New Zealand, most especially in this area.

Another whale specie that can be found in New Zealand is the sperm whale. One of the best spots for this is Kaikoura. Kaikoura can be found on the South Island’s east coast, and it is one of the few places in the entire world where one can easily see this whale specie. Sperm whales are the biggest among toothed whales. They grow to more than 15 meters in length. They usually dive really deep into the ocean waters so they could feed. To spot this mammal in Kaikoura, one does not have to wait for a specific season. They can be seen all throughout the year.

Orca is another whale specie that can be found in New Zealand. Orcas are also known as killer whales. They can be spotted in New Zealand starting December until March. Those who are into humpback whales can spot these around June and July.

Increase your chances of successfully moving to New Zealand by choosing the best program that fits your plans right here at Global Visa Support: http://globalvisasupport.com/nz.html.

Promote a bigger chance of moving to NZ by getting professional help from the expert team at Global Visa Support: http://www.globalvisasupport.com/contacts.html.