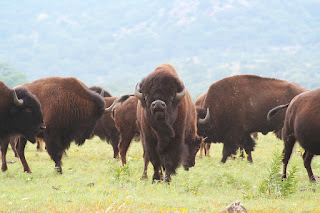 The animal kingdom is huge. There are tons of animals all around the world and most people are often always amazed when they get to see an animal that is unique or one that they have only seen in photos, movies, or TV shows. One of these animals is the bison and it can be found in the United States of America. The locals of the country are quite lucky to be able to see this animal in the flesh, and many immigrants in the USA are also quite happy that they are able to experience seeing this themselves.

These animals are big bovines. Some of them have already gone extinct. But there are also surviving bison species. One of these is the American bison which currently can be found only in North America. This species also has a huge number which is a great thing. It is also referred to as buffalo by the people in Canada and the United States of America. However, the American bison is really not related to the real buffalo.  The bison species that can be found in North America has two subspecies. These are the Plains Bison and the Wood Bison.

Bringing back the bison numbers

The bison has been featured in many books, photos, stories, and movies. It is even said to be the most iconic mammal in the USA. It even has a national campaign helping it out. There was a time when the American bison was on the verge of extinction. It was a good thing that the scientists easily recognized this and so campaigns were made to ensure that it did not suffer a sad fate. And thankfully, after years of protecting the bison, the numbers have definitely gone up and more and more bison are now roaming the country. Plus, the country also created the National Bison Range which has helped the animal grow in number.

It was thanks to US President Theodore Roosevelt that the bison finally grew its population. In 1908, then-President Roosevelt signed a law that allowed the government to purchase pieces of land, solely for the purpose of bison conservation. He had been hoping that the move would help preserve the specie and make its population grow back to when there were millions of them roaming lands and prairies in the country.

Roosevelt surely would be proud to know that his plans and actions back in 1908 had bore fruit. The lands used for bison conservation are now the home to many bison. In fact, people in the USA can find themselves enjoying the sight of these animals roaming in the wild as they have done decades ago.

Extraordinary programs offered by Global Visa Support have been created to help you make that move to the United States of America: https://www.globalvisasupport.com/usa.html.

Save yourself the trouble and get professional help on moving to the USA. Premiere professional help can be yours by simply scheduling your appointment with the Global Visa Support team: https://www.globalvisasupport.com/contacts.html.