The Squid Squad: Squid Museum And Squid Ice Cream That Immigrants In New Zealand Should Visit 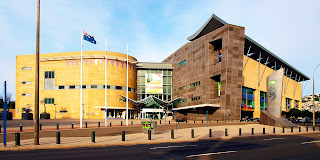 Many people are not that fond of squid. It is not surprising, though, because this sea creature is not cute as jellyfish or as friendly as dolphins. They also excrete black ink, which is seen as an attack by some people. They also have these really long tentacles which can also be seen as scary. But what is interesting is that there are some places in New Zealand that give honor to this marine creature that just needs to be understood a little bit more. And immigrants in the country should really take the chance to go and visit them.

Yes, there are two places in New Zealand that really give honor to the squid. Yes, the squid. These two places are the Te Papa Museum in Wellington and the Giapo.

What are these? Read on.

The squid in the Te Papa Museum

The Te Papa Museum which is in Wellington is the only place in the world where one can find the colossal display of a squid. Yes, it is that unique because there no other place in the world but New Zealand where a giant squid can be found on display. It is a specimen that was captured back in 2007 in the waters of the Antarctic Ocean. It weighs around 470kg and it surely is a sight that would be best seen in person. After all, it is not every day that one gets to see a real giant squid. Plus, one can simply imagine a lot of things hiding beneath the oceans that are like or even worse than this giant squid. Oh, the locals of the country are quite proud of this squid display.

The squid in Giapo

For another opportunity that is connected to squid, one may want to head to Giapo. Giapo is this store in the New Zealand city of Auckland. It offers ice cream, sorbet, and gelato which are all handmade. It also offers these in traditional flavors as well as in really adventurous ones. And that is where the squid comes in. No, the store does not have a squid working the product bar. But it does offer ice cream that is squid-flavored. Yes, there is such a thing and it surely one flavor that people should try. The shop has definitely worked their magic again and created a work of delectable art using squid and incorporating it into their ice cream. Now, that is something that people do not often get!

Those who would like to try this one should go to Giapo and ask for the Colossal Squid. It is the most adventurous flavor for most people and it is really quite incredible. One may not even think that they are eating squid.

Check out the programs from Global Visa Support any time today. These programs have been designed to help you move to New Zealand as soon as possible: http://globalvisasupport.com/nz.html.

Amazing help on moving to NZ can also be yours. All you need to do is contact Global Visa Support and schedule your appointment: http://www.globalvisasupport.com/contacts.html.